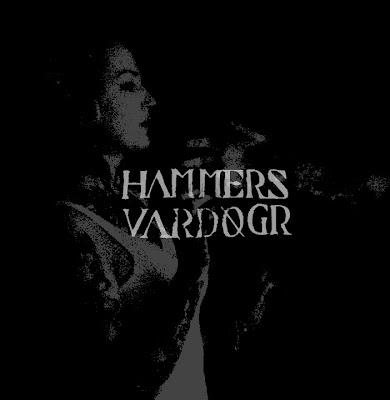 HAMMERS are a group of musicians hailing from Manchester with an original approach to creating brutal crust-laden hardcore. I wanted to include 'metal' in the synopsis, but as soon as I use the words hardcore and metal together my whole body cringes. It is crusty in that it projects gritty bass, low guttural voice and stampeding tempos.. all driven along in an adventurous early Dischord-era style where technical prowess and unpredictable structures aren't sneered upon.

The first track 'Casting Spells' oozes dark feedback(y) mess all over my ears, before spitting out a pristine sounding riff that instantly cuts through the layers of vicious feedback...From black metal to early Baroness in the flip of a switch. The titles of this album almost remind me of the chapter names of some prophetic book out of the middle ages; encouraging a bewildered sense of awe. A similar feeling most have experienced through attempting to read 'Dante's Inferno' when they were 17...intriguing nevertheless.

The kind of head-nodding (cause there are 'kinds') it gets out of me is a kind of blend between the focused jarring approach induced by math rock and the head-down-to-the-ground shake techniques regularly seen at your local thrash gig. Its easy to say Hammers envelop many styles in their music, it is hard to determine exactly how due to the fluency of it. A track that sticks out to me lasts a timely :23 secs named 'Endoteric'. Mainly because I have a great big mushy soft spot for grimy doom but secondly for that chord at the end of the riff; sounds like an orchestra of electric bass guitars all playing the same note in a massive expansive auditorium. Leeds groove metallers Canaya return to the ship's helm for a night of pure, adrenaline fueled music. Steadily chipping away at the UK's metal scene, they have built a solid undercurrent of buzz with their self-produced EP 'Alignment of Dying Planets' including a melee of live shows, some of which are attainable online; check this feed out hosted by eccentric rockers HIMSELF in an undisclosed venue....
http://www.ustream.tv/channel/himselflive
The debut EP, 'Alignment Of Dying Planets' was released in 2010 to great reviews in Rocksound (8/10), Big Cheese (5/5) and received heavy rotation on Total Rock Radio.

'What the industry has it's sights on' - Metal Hammer

'Alignment Of Dying Planets' is twenty minutes of unremitting ferocity. It’s an aggressively potent EP, the kind of record that will have you smashing yourself across the temple with a hammer afterwards for relief.' - Szikora Press

'Combining a voice with the caustic power of Norma Jean with some seriously Mastodon-esque riffs, Canaya’s EP is a violent twenty-minute pole-axe to the temple.' - Heavy Blog Is Heavy

Big Spaceship welcomes you aboard to join us on our travels across the deepest fathoms of the cosmos in search of new music, art and culture.
The Captain of this ship is drunk at the wheel and holds no knowledge of where his fractured mind will take us...

Stuff we've mentioned in the past: