A rare collaboration with Big Spaceship and The Gig Barons...

We bring you noise in the form of:

WAHEELA
5-piece improv noise rock from Newcastle. Waheela emit a sound not unlike the stony cataclysmic void ensuing from a distant asteroid field. Beyond the physical boundaries there lies a faint but hectic echo of clattering events, flurries of frequencies and mind shattering consequences. Waheela take you inward to the chasms of your mind through feedback, psych drones and razor sharp wails.
If you like Krautrock combined with heavier tones, electronics and screamed vocals Waheela are for you.

Check out their soundcloud for loads of sweet live recordings and stuff:
https://soundcloud.com/waheela

At the Wharf Chambers

‘Welsh power trio’ isn’t the sort of phrase you get to break out often, but it’s what you’re gettin’. ‘Never Turn Your Back On A Friend’ by Budgie is in my latest slab of purchases and delivers the sort of 70’s hard rock you want and expect from the classic guitar/bass/drums combo of that time. Geddy Lee style high vocals laid over straight weighty groove, interspersed with proggy tangents and clean haunting passages. The first and last tracks say it all:‘Breadfan’ and ‘Parents’ couldn't be more opposite on this album and yet fit perfectly within it ....it’s all part of the journey. " 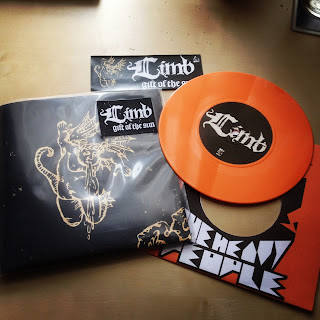 At the beginning of March The mighty Limb traveled up from Londinium on the mega bus, gear and all, to play a Big Spaceship gig at Santiago's with Barricades and Back mass.  All the bands were killer but a special mention needs to go out to Black Mass who executed a serious face melting onslaught of frightening brutality.

When the gig was over I picked up this little gem from the band and what a treat it turned out to be.  An orange 7" vinyl, fold out poster, sticker and digital download coupon, all released on New Heavy Sounds, they even threw in a 3 track demo CD that was put out which hunter records.

Side A, Gift Of The Sun is definitely a triumph for the band, its not easy listing to this track without smashing your fist in the air and shamelessly banging your head. The first side of this record is produced by Ross Halden and the band, together they have perfectly captured the bass heavy fuzzed out tones found in their live performance with the right balance of riff clarity and outrageous filth.

Side B is made up of Quiet Earth and Dead Voice.  At 1:33 Quiet Earth is an obnoxious little outburst of solid bullshit free aggressive behavior, expressing the bands talent for cutting out anything they don't need, this is apparent in the next tune, Dead Voice which is a signature offering of their own brand of doom. As heavy as Limb are, they travel light, injecting no filler into their tunes whatsoever.

Side B carries a slightly different flavor, produced by Samir Eskanda and Tim Garratt as well as the band, Side B definitely holds a more DIY sludgy vibe. This is not to suggest that one side is better that the other but each side of the record holds a different mood.  Having that subtle nuance of dynamic not only in the music but in the styles of recording really is the cheery on top with this release.  This 7" beauty is available from the band or from New Heavy Sounds each can be found on bandcamp. Be sure not to miss these guys play the next time they pay us a visit.

Big Spaceship welcomes you aboard to join us on our travels across the deepest fathoms of the cosmos in search of new music, art and culture.
The Captain of this ship is drunk at the wheel and holds no knowledge of where his fractured mind will take us...

Stuff we've mentioned in the past: